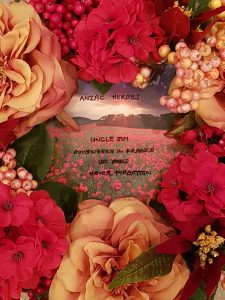 As we approach ANZAC Day 2018 I will be thinking of the ‘…York boys…’. This is an expression used by Uncle Jim, 4783 Pte James Ross Duperouzel 51st Bn. AIF, in his letter dated 16 April 1916 to his father George Duperouzel on the family Farm at York. Uncle Jim was referring to 4821 Pte Joseph James Gurney; 4827 Pte Henry Hynes; 2238 Pte Charles Henry Otway and 4904 Pte William Taylor; 2674 Pte Percy James Davies from a neighbouring farm, who went to Qualen school with Uncle Jim, and his cousin 4629 Pte Sidney Harry Wansbrough, known as Harry. Uncle Jim also referred to his younger brothers George Charles Duperouzel who later enlisted as a Gunner in the AIF in 1918, 39848 Gunner Duperouzel, and fought on the Western Front and ‘Alick’, Alexander Duperouzel, my father, who was too young to sign-up for WWI. He joined the WA Police Force in 1924.