On Thursday, February 12, 1959, Police Sergeant 2 Class, 1458, Alexander Duperouzel, of the Western Australian Police Force, was awarded the Police Long Service and Good Conduct Medal (PLSGC). I am proud to say that 1458 Sgt. Alexander Duperouzel, known throughout his life as Alec, was my dad!

On this special occasion this Police medal was being presented for the first time to 130 Western Australia Police Officers who had completed 22 years, or more, long service with exemplary good conduct. Not surprisingly, by Feb’ 1959, a large number of Police officers had already served more than 22 years, including my dad who, by this time, had completed 35 years. All medals under the Imperial System of the Commonwealth, were approved by HM Queen Elizabeth II and issued to all Australian Police Officers until 1975 when the Australian Honours System was introduced and the PLGSC was replaced by a new National Medal.

This prestigious Police medal was presented by the Governor of Western Australia, His Excellency the Lieutenant General Sir Charles Gairdner, GBE, KCMG, KCVO, CB. The Governor, escorted by Policemen mounted on motor cycles and horsemen, was joined by hundreds of family and friends who assembled under the shade of the morten bay trees on the Perth Esplanade, together with the Western Australia Police Commissioner, Mr James Murray O’Brien, other distinguished guests and the Western Australia Police Band. My sister Loris, aged 16, and my brother, Ken, aged 29, represented the family on this very special day to witness our dad being presented with his Police medal. Indeed, this occasion was a very proud moment for all the family. At that time our dad was the Sergeant in charge at the Palmyra Police Station, a building situated at the rear of the property where our family were living at 351 Canning Highway. Loris recalls a treasured memory of the day:

“…I accompanied dad to the medal ceremony and due to the heavy traffic it looked like we would arrive late…so dad parked the car in a space where perhaps he shouldn’t have. Fortunately, we arrived on the Perth Esplanade in time and he was able to line up with the other officers and enjoy the occasion. However, he was not so happy after the ceremony having returned to the car to find he had been issued with a parking ticket! The parking ticket was withdrawn the next day following a telephone call to explain the circumstances…”

I am thrilled to let everyone know that an invaluable collection of 19 black and white photographs of the medal ceremony have just come to light – photos that have never been seen before!! Can you imagine my joy and excitement when I started looking through the photos and identified my dad in 4 images. On closer examination and having cropped image015 it is possible to make out my brother Ken standing third from the left with his left hand raised to his chin. This collection is to be treasured for they provide a fabulous social insight into our Western Australian history of what took place on that special day. I wish to extend my sincere special thanks and appreciation to the Western Australian Police Force, in Perth, for their help and assistance with my quest and for providing permission to share these photos. All 19 photos, plus a few I have been cropped to show my father more clearly, together with other family photos and Trove newspaper cuttings, can be viewed below.

As for the Police medal itself, the obverse of this medal bears the effigy of the reigning monarch with the words, ‘FOR EXEMPLARY POLICE SERVICE – ELIZABETH II DEI GRATIA REGINA F.D.’ while the reverse features a female figure of Justice holding scales in her left hand and a wreath in her right hand circled by the words, ‘FOR EXEMPLARY POLICE SERVICE’ – note: the symbol of a police truncheon under the figure of Justice. The suspender is straight and found in both swivelling and non-swiveling formats. The naming on the rim is in impressed capital letters, 1458 SGT. CL 2. A. DUPEROUZEL. The Ribbon bar is blue in colour and has two narrow parallel white stripes on either side.

In June 1928 Sgt. Duperouzel, when stationed at the East Fremantle Police Station, married Agnes Mary Hevron, a local girl known as Mary, who was working as a bookkeeper at the Dingo Flour Mill, in North Fremantle. They had five children: Kenneth James born in 1929; John Francis 1931; Alan Joseph 1939; Loris Elaine 1942 and William Thomas 1946. Sgt. Duperouzel retired from the WA Police Force on September 16, 1961, his 60th birthday, having served the WA Police Force with distinction for 38 years in Perth, Fremantle, East Fremantle, Dowerin, Gingin, Wagin, Perth, South Perth, Perth, Fremantle and Palmyra. However, dad’s retirement was short-lived for he passed away, aged 62 years, on February 22, 1964. Sadly, my mother, Mary, pre-deceased him on July 1, 1961, aged 58 years, three months before his retirement.

Written by William Thomas Duperouzel based on extracts from ‘Petrosellum – A Global History of the Families Duperouzel / Duperrouzel’ and new material. 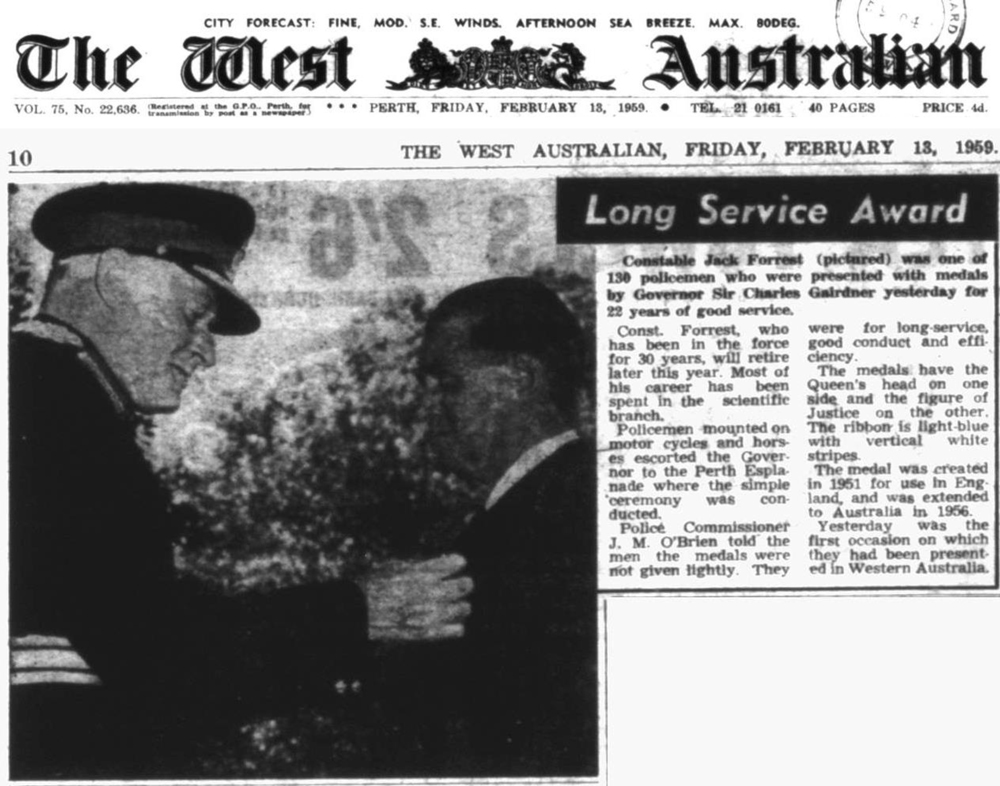