The Duperouzel brothers Jim and George from York, Western Australia

The Duperouzel brothers Jim and George from York, Western Australia, whose fate took different paths on the WWI battlefields of the Western Front 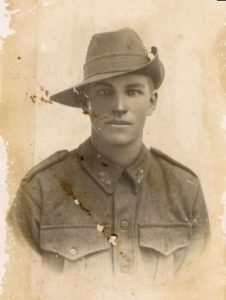 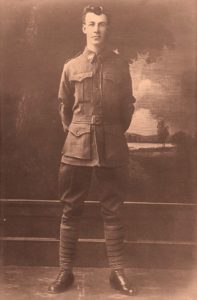 We remember and give thanks for the lives of two members of the Duperouzel family who served Australia during WWI.

James, known as Jim, and his younger brother, George, from the small hamlet of Qualen, near York, Western Australia, were the grandsons of Julia Neagle, from Tipperary, Ireland and Aimable Ciril Duperouzel, from St Aubin-du-Perron, France – pioneers of York from the late 1850s.

At the age of 18 years Jim (left) volunteered to join the AIF having received the formal permission of his parents, Sarah Jane Willey and George Charles Duperouzel. Following the completion of his initial training at Blackboy Hill he sailed from Fremantle on the troopship HMAT ULYSSES bound for Egypt as part of the 11th Bn. 15th Reinforcements. Jim made a number of new ‘mates’ during the voyage as evident from his 3-page letter sent from Alexandria to his father dated 16 April, 1916. He clearly anticipated a great adventure which lay ahead and that he would be back home again in time for the next harvest. His letter also conveyed his affection for his family, neighbours and the friends who he referred to as the ‘York boys’. In Alexandria Jim was re-assigned to the newly formed 51st Bn. and within weeks found himself in the theatre of war in the trenches near Pozières on the Western Front. 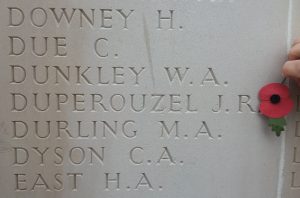 Sadly, 4783 Private James Ross Duperouzel was killed in action in August 1916 during the first Advance on Mouquet Farm on the Somme when the constant bombardment of the trenches lasted for three days and nights. Of the 99 servicemen of the 51st Bn. whose death is recorded between the 14th, 15th and 16th August Jim is one of 78 who have no known grave. Their name and rank are inscribed on the Memorial Wall at the Villers-Bretonneux Cemetery, Somme. Jim died a week after his 19th birthday. It is ironic that Jim paid the ultimate sacrifice defending his grandfather’s country and whose remains lie in the battlefield ‘somewhere in France’ at a distance of about 400km due east of the of St Aubin-du-Perron, near Coutances – the birth place of Aimable. Not Forgotten.

The tragic news of Jim’s death was delivered to his parents on the family farm on 11 September 1916. The distant grief of their loss must have been unbearable. According to Jim’s nephew, Ross Bartlett,


“…Granny Duper (Sarah) was sitting in the porch at the farmhouse in Qualen when the postman arrived on horseback from York to deliver a telegram containing the tragic news that her son Jim was dead having been killed in action somewhere in France…Granny Duper never really got over this news as Jim was her fourth child to predecease her…”. At the time Sarah and George’s youngest son, Lindsay, known as Ted, was only five months old and her other five children were all under the age of seventeen. 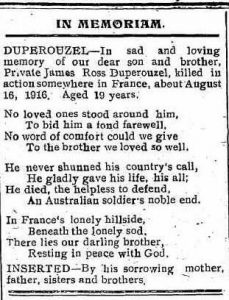 The family’s grief was to last a life time for Jim’s parents and siblings. It appears the family never knew exactly where Jim was killed other than, ‘somewhere in France’.

Eight years after Jim’s death, the family published this moving tribute to their dear son and brother in the local Avon Gazette and York Times newspaper on 17 August 1923.

Jim’s younger brother, George, volunteered to enlist in the AIF towards the end of 1917 having reached his 18th birthday. It must have been with a heavy heart that his parents signed his enlistment papers knowing that their eldest son Jim had been killed on the battlefields of Europe just over a year earlier. 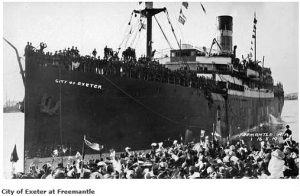 Uncle George travelled to Suez, Egypt and England in 1918 before moving to the front line as 39848 Gunner George Charles Duperouzel with the 5th D.A.C. – Divisional Ammunition Column. The D.A.C. was a supply train usually of horse drawn wagons and motor trucks which hauled shells up to the artillery units at the front. George later transferred into the 14th F.A.B. – Field Artillery Brigade – where he experienced appalling road and weather conditions and as they came close to the front line often came under long-range enemy fire. It must have been unnerving for Gunner George to sit on a truck, or wagon, full of ammunition whilst shells were exploding all around him.

For George’s parents and siblings it must have been a huge relief that he survived the battlefields of France when he arrived back in Fremantle on board the troopship SS City of Exeter on 16 August 1919 – exactly 3 years to the date when Jim was killed.

George married in 1928 to Edith Eunice Brand, known as Eunice, a teacher who was gifted at drawing and they raised three children. Having started married life in York the family settling in Marvel Loch, near Southern Cross, from 1934 where work was available in the gold mining industry. George did all kinds of work including prospecting, gold mining, wood cutting and sheep shearing. He also worked as a mine employee and farm hand. In addition, he was employed by the Marvel Loch State Battery. George never travelled far without his accordion and mouth organ. He would entertain family and friends with his old favourite tunes.

George died in 1980, at the age of eighty one, having survived Eunice by thirteen years.

The Duperouzel family in 2018 are proud to have had two brothers who served during WWI. Jim and George will not be forgotten.

The tribute to Uncle George as one of the ‘York boys’ can be read by clicking on this web link:
https://duperouzel.org/wp-content/uploads/2018/01/39848_Duperouzel.pdf

Further reading about Uncle Jim and Uncle George is also is available at:
https://duperouzel.org/petrosellum/petrosellum-the-book-family-trees