Lest We Forget. 4783 Pte James Ross Duperouzel 51st Bn. AIF – killed in action at Mouquet Farm on the Somme, France, on 14/16 August 1916. Uncle Jim has no known grave. The tragic loss of Uncle Jim was felt deeply by the family as evident by this moving tribute published many years after his death in The Avon Gazette and York Times on two occasions – 17 August 1923 and 23 August 1925: 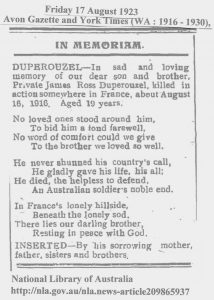 IN MEMORIAM. DUPEROUZEL — In sad and loving
memory of our dear son and brother,
Private James Ross Duperouzel, killed in
action somewhere in France, about August
16, 1916. Aged 19 years.
No loved ones stood around him,
To bid him a fond farewell,
No word of comfort could we give
To the brother we loved so well.
He never shunned his country’s call,
He gladly gave his life, his all;
He died, the helpless to defend,
An Australian soldier’s noble end.
In France’s lonely hillside,
Beneath the lonely sod.
There lies our darling brother,
Resting in peace with God.
INSERTED— By his sorrowing mother,
father, sisters and brothers.

Congrats to the Australian War Memorial for the considerable improvements they have made to their web site this year. Check out this AWM web link and the National Library of Australia – Trove which have links providing easy links to information about the three sons of George Charles Duperouzel and Sarah Jane Willey, from York, Western Australia, Jim, George and Ted, who served in WWI and WWII: https://www.awm.gov.au/collection/P10325781?search