The Reverend Frederick Lynch, the first Rector of the Church of St Peter’s,  Gilgering, near Beverley, Western Australia 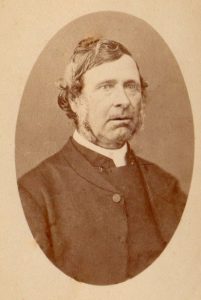 What is the connection between the Reverend Frederick Lynch, my French GGF Aimable Ciril Duperouzel and the convict ship ‘Lord Raglan’?

In early 1858 Revd. Lynch and his family travelled as free settlers from England on the convict ship, ‘Lord Raglan’, arriving in Fremantle on 1 June. Revd. Lynch, the Religious Instructor throughout the voyage of the ‘Lord Raglan’, was accompanied by his wife, Margaret, and their 2 young boys, Frederick and George. On the day after the ship anchored Margaret delivered a baby daughter, Mary Elizabeth Anne, known as Annie. As many readers will know GGF Aimable was an important passenger on ‘Lord Raglan’, being one of 268 convicts. I wonder if Revd. Lynch spoke French and conversed in this language with GGF and his French convict friend Frédérick Surget?

In his first 6 months in Western Australia Revd. Lynch spent time as the Headmaster, and assisted Bishop Hale with the establishment of the first boys’ college in the colony, later known as Hale School. In December 1858 he arrived with his family at St Peter’s to become its inaugural Rector and the first divine service was celebrated in St Peter’s on the 19 December 1858.

I would like to think GGF Aimable got to know Revd. Lynch during their voyage on ‘Lord Raglan’ and that they would have met up again having settled in the York / Beverley district for it was the Revd. Lynch who conducted the wedding service of GGF Aimable when he married Julia Neagle from Ireland in the Church of St Peter’ in March 1863.

Revd. Lynch remained the only rector to reside at St Peter’s and served the local community for 31 years until his death on 27 March 1889, aged 73. He is buried alongside his wife, Margaret, in the churchyard at St Peter’s.

I am delighted to have made contact with the descendants of Annie Lynch and am very much looking forward to visiting Gilgering again. This time I hope to meet with the Friends of St Peter’s and to take a peep inside this beautiful historic Church – to thank The Friends for their hard work and dedication for their restoration endeavours.