Police Constable Alexander Duperouzel’s bush tracking skills saved a man’s life after being lost in the bush for three days in the rough country south of Gingin, Western Australia 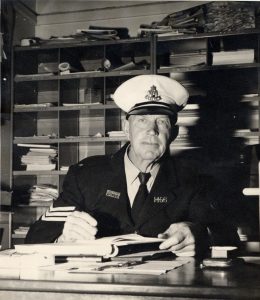 In September 1961, to mark the occasion when Police Sergeant Alexander Duperouzel, known as Alec, retired after thirty-eight distinguished years of service with the Western Australia Police Force a Perth newspaper published an article entitled, ‘Dearth of Trackers’. This article mentions, “…his bush tracking skills once saved a man’s life in 1938…and he thought it was a great pity that Australians were gradually loosing the tracking art…”.

The brief article about saving a man’s life was published many years earlier in The Daily News, on 31 December 1938, under the headline ‘LOST MAN DID NOT PANIC’ – at this time Sergeant Alec was based in the Western Australian country town of Gingin situated some 60 miles due north of Perth.  “…Constable Duperouzel, who with Constable Morrow, took a leading part in finding Mr William Harrop, aged 64 years…after being lost for three days in rough country south of Gingin…”. Constable Alec was stationed at Gingin between 1935-1939 before relocating to Wagin some 140 miles due s-e of Perth where he served as the Police Officer-in-Charge for the Wagin District from 1939 to 1944. I am proud to say that Sergeant Alec was my dad.

Having joined the WA Police Force in 1924 he served in Perth, East Fremantle Dowerin, Gingin, Wagin, Perth, South Perth, Fremantle and Palmyra. In February 1959 he was one of 130 Police Officers who were presented with the Police Long Service and Good Conduct Medal (PLSGC) from the Governor of Western Australia, His Excellency the Lieutenant General Sir Charles Gairdner, GBE, KCMG, KCVO, CB.